Imagination Play offers a wide range of safety surfacing options from basic sand or mulch to synthetic surfaces which include poured in place rubber surfaces and synthetic turf for dry play.
However, Imagination Play are the only company that can supply impact attenuation for water play that can withstand chemical contact over sustained periods supported by warranties.
Play naturally encourages children to explore and test their abilities and the continuous human desire to continually challenge themselves presents some risk of injury.
Imagination Play’s role in designing and supplying playground equipment is to ensure that the equipment is compliant to Australian Safety Standards requirements, eliminating issues such as head and finger entrapments but also to ensure there are compliant fall zones in place appropriate for the play equipment’s use. These vary in size according to the play activity and height of the equipment.

Consideration of all of these elements is necessary when designing a play piece as well as when determining the impact attenuation required to minimise the risk of head injury in the instance of a fall.
Safety surfacing can be used to add colour or contrast both indoor and outdoor recreational areas, which can add enchantment, excitement and stimulation to children minds.

CombiTile is an Australian designed and patented safety surfacing system that offers many advantages over other surfaces such as high impact attenuation, easy installation, water play application and a synthetic turf option that gives an impact height of 2.7 metres. It can also be finished with a wet pour rubber surface.

Rubber wet pour is brightly coloured and can be designed to have multiple patterns and colours throughout, as well as different thickness’s to cater for varied impact attenuation. It offers the option to be poured in irregular shapes and be shaped into ground mounds to add character and adventure.

Synthetic Rubber wet pour is fantastic surface for children’s playcentres, playgrounds at schools or in public recreation areas as well as suitable for water play areas. Rubber wet pour is slip resistant which makes it safe for all ages and abilities but importantly it allows wheelchair accessible that isn’t possible with sand or mulch surfacing. 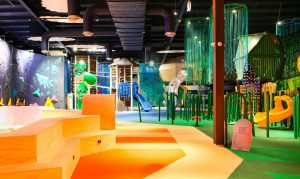 Coloured SBR Rubber Granule Soft fall Surfacing – is one of the best soft fall available for commercial playground equipment. It is structurally stable ensuring you will always comply with Australian Safety standards regarding rubber soft fall surfacing. Schools, councils and commercial businesses with playground equipment are best off using rubber soft fall tiles for both ease of fixing if it is vandalised and of course safety!

Please contact us for further information, specifications and costing’s. All of our prices include crushed rock base, surface installation and surrounds. Pricing assumes a clear and level site with adequate drainage.

PLEASE REFER BELOW FOR THE PLAYGROUND SAFETY SURFACE TEST REPORT

School of Mechanical Engineering
The University of Adelaide
South Australia

1.0 Executive Summary
ImaginationPlay provide a tiled dual-layer wet-pour recycled Coloured SBR/rubber granule product for assessment as playground undersurfacing material. The test was conducted on the impact absorption properties of the tiled rubber undersurfacing product according to the impact test requirements of the Australian Standard: AS4422:1996, when glued together in the manner specified by the manufacturer.

2.0 Introduction
The impact absorption properties of a wet-pour recycled rubber tile product as supplied by Imagination Play was measured according to the impact test requirements specified by the Australian Standard AS/NZS 4422:1996.

The sample consisted of four separate dual rubber layer test pieces, glued together along common edges, resulting with a combined test piece of size of 1m × 1m. The testing involved dropping a 5 kg anatomically-shaped aluminium headform from specified heights and measuring the deceleration of the headform as it strikes the test samples. The severity of the impact is measured in terms of the Head Injury Criterion (HIC).

The Australian Standard AS/NZS 4422:1996 concentrates on a method for measurement of HIC, which indicates the deceleration impact on the brain. It is does not indicate injury potential to other parts of the body. The HIC values set in the standard are those, which, if exceeded, are likely to result in injury to the brain. It should be noted that although the standard stipulates that a HIC value of 1000 (or a deceleration value of 200 g) will determine the critical fall height, this does not have widespread agreement. Common sense should always be used in the interpretation and implementation of the results.

The documents that are pertinent to this report are:

The equipment used in the experimental testing is shown in Figure 1.

The equipment that was used to perform the impact testing is outlined below:

Drop Rig: The testing drop rig is a portable stand that is used to raise the headform. A pin is released which permits the headform to fall unguided onto the test sample. The height to which the headform is raised is measured with a vertical measuring tape between the upper surface of the sample and the lowest point of the hanging headform.

Recording Equipment: The output from the strain gauge amplifiers is connected to an analog to digital (A/D) converter board inside a notebook portable computer. The A/D board samples at 20.0kHz. The collection of data is triggered automatically based on the starting point of an impact event as determined from the constant monitoring of a selected channel value. The data acquisition procedure has a pre-trigger capability, such that the data is collected over a time period spanning from just before to just after the impact event. A sine wave at 200Hz is supplied to one of the A/D channels to provide a check that the sampling rate is accurate.

Product Sample: The tiled sample rubber soft fall undersurfacing material was supplied in the form of four
(equal) pieces glued together (by the manufacturer), with a total size of 1m × 1m.
This was positioned flat against a concrete floor.

All testing was conducted at the Thebarton Campus of the University of Adelaide in a laboratory environment.

The testing method follows the Australian Standard AS/NZS 4422:1996. In general terms, the sample to be tested was placed on a concrete floor beneath the drop testing rig, the J-type headform was released from various heights and the deceleration of the headform was measured as it struck the test sample. The critical fall height is determined as the height when the Head Injury Criteria (HIC) equals 1000. The Head Injury Criteria is calculated as:

The test procedure is listed below:

The surfacing samples were tested at the locations shown in the Test Sheets in the Appendix.

Note: For the dual-layer rubber product samples tested, the magnitudes of the impact results over the first three drops (at any particular location) were found to be increasing. Since the impact performance of the surfaces during these three drops were generally non-repeatable, it is deemed not appropriate to include these initial results among those to be considered for the AS4422:1996 standard. They do not provide a good indication of the longer term (repeatable) performances of the rubber undersurfacing surfaces, and are generally not included on this basis. The impact test results measured after this initial “conditioning” process were found to be reasonably consistent and repeatable within acceptable limits.

According to the manufacturer, the Coloured SBR/recycled rubber impact surface tiles are described as follows:

“The top-coat surface layer consists of Coloured SBR rubber granules of approximate diameter of 1mm, and
has a thickness of 10mm. The 40mm thick base layer is made from shredded and granulated recycled
tyre rubber particles of varying specified sizes. All particles in both layers are bonded together with a
polyurethane-type binder.”

A photograph of the ‘“EDPM” Rubber Impact Surface Tile (50mm)’ undersurfacing sample is shown below in Figure 2. The average thickness of the sample was measured (on the day of testing) to be approximately 50mm.

The results from drop tests on the ““Coloured SBR” Rubber Impact Surface Tile (50mm)” sample are listed in Table 2.

The results shown in Table 2 should be read in conjunction with the corresponding Test Sheet in Appendix A.
The critical fall height for the ““Coloured SBR” Rubber Impact Surface Tile (50mm)” undersurfacing sample is 1.4m.

6.0 Conclusions
The testing of the tiled wet-pour Coloured SBR/recycled rubber product supplied by ImaginationPlay was undertaken according to the requirements of the Australian Standard: AS/NZS 4422:1996. The outcome of this testing resulted with the critical fall height for the product listed.

The following contain the test sheets for:

Introduction
AS/NZS 4422:1996 specifies testing requirements to determine the critical fall height for playground
safety surfaces. The critical fall height is determined by installing the safety surface as specified by the manufacturer and determining the fall height at which one of two safety criteria are exceeded; those criteria are the Head Injury Criterion exceeding 1000, and the maximum acceleration due to the impact exceeding 200 g. The critical fall height is determined by dropping an instrumented headform from various heights onto the surface and measuring the acceleration due to the impact. Heights tested include those which produce measurements that satisfy the relevant criterion and those which exceed the relevant criterion.

It should be noted that the results reported here relate specifically to the installation of the product
as specified by the manufacturer below and no allowance has been made for incorrect installation,
ageing or degradation of the product. These results should always be used in consultation with the
installing authority. The critical fall height has been calculated relative to a nominated piece of equipment and no assumption has been made about the height of the user above that equipment. The critical fall height is quoted to the nearest 0.1 m, rounded down, as specified in AS/NZS 4422:1996.

Product Tested
The product tested was supplied by ImaginationPlay, of Hurstbridge, VIC and is described as ““EDPM” Rubber Impact Surface Tile (50mm)”. The product sample consisted of a duallayer rubber tile surfacing test piece, with an approximate average measured thickness of 50mm. The test sample consisted of four equal tile pieces glued together at the edges by the manufacturer, resulting with a final test piece of approximately 1m×1m in dimension. The testing was conducted at the Thebarton Campus of the University of Adelaide.

Installation and substrate
The product sample consisted of a single combined test piece (of dimension 1m x 1m), resting flat
against the substrate, which was a concrete floor.

Testing
This product was tested to the requirements for AS/NZS 4422:1996. The position of the test
locations on the product sample are shown in Figure A1. Results at locations A,B & C are presented in this report.

Test Results:
The results for the ““EDPM” Rubber Impact Surface Tile (50mm)” product are displayed in Table A1 below:

Critical fall height
The calculated critical fall height for this product is 1.4m, based on the HIC values
measured at the height of 1.5m in the above table. The 200 g acceleration limit was not exceeded in
these tests.

Graphical results
Figures A2 and A3 show how the HIC values and the peak accelerations vary with the minimum fall
height. Figure A4 shows an actual acceleration trace from the tests; specifically from the first drop test at a height of 1.6m.

This is to certify that the product sample: ““Coloured SBR” Rubber Impact Surface Tile (50mm)” playground undersurfacing, produced by ImaginationPlay (as described in MechTest Report: MT0976), has been assessed according to the impact test procedure described in Australian/New Zealand Standard: AS/NZS 4422:1996.

Tests were conducted on the impact absorption properties of this dual-layer
Coloured SBR/ recycled rubber granule product, having an average total thickness of 50
mm (measured on the day of testing). As a result, the following specification was
determined:

This page represents a summary of the major findings of the MechTest report: MT0976. For
more detailed information regarding any aspect of the test procedure, the interpretation of test
results or the description details of the product tested, please refer to the MechTest Report:
MT0976 (in its entirety). A copy of this is available upon request from: